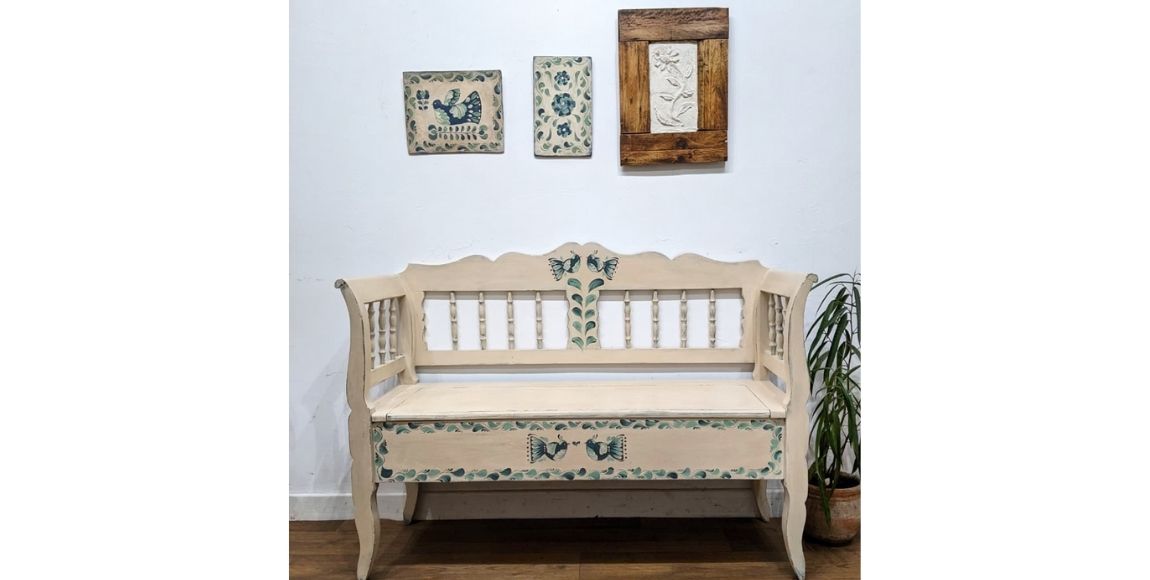 Gosia Hobson set up Studio Sosenka during the pandemic. She creates beautiful hand painted furniture inspired by Eastern Europe’s vibrant folk art. We find out more about her designs and the history behind them.

What inspired you to set up Studio Sosenka?

In a way, Studio Sosenka had been waiting in the side-lines for years – and the opportunity presented itself when Covid struck. I am lucky enough to have a space at home here where I had been running a small art space / gallery called Studio90 for several years. At a point where I had a list of artists waiting to come in again for shows through 2020, we were all suddenly put on hold with no idea when all this would end. I then thought I would temporarily install myself into that space and start painting. It turned out that I’m still in the studio and loving it!

Can you tell me a bit about your career journey – have you always been involved with furniture design or is this a new passion?

The household I grew up in Germany was full of books on Polish culture and folk art. Poland at the time was a motherland that none of us from our family were allowed to visit – so my parents did their best to keep those cultural links going. And I do remember being absolutely fascinated by the exuberant and colourful designs in those books, which are still my treasures to this day!

I spent much of my childhood and then sporadically throughout much of my adult life with a brush in hand whenever I could – but it wasn’t until the studio space made itself available that I started doing it in any serious way at all.

What is it about Eastern Europe’s folk art that inspires you?

I guess what inspires me about European folk art is not just the historical context but also very often the sheer abandon of the hands that created it! There is a great example of this in a village located in south eastern Poland called Zalipie where since the 19th century the women of the village painted everything they could lay their hands on! Their houses, barns, wells, walls in their rooms, kitchenware, pretty much everything!

They were obviously not trained artists, and each would have her own style and interpretation of the local vernacular. Zalipie is now a tourist destination and very much still a work in progress, and it’s definitely on my bucket list to visit one day!

My grandfather also was a well-known Polish painter and was heavily involved in the arts and crafts movement in prewar Poland, and in a funny sort of way I sometimes feel I am still inspired by his referencing of Polish folk art, and also of my childhood in Bavaria where folk art is still very much alive and respected as an art form.

Can you tell us a bit more about the history behind folk decoration?

East European folk art is very distinctive, especially for each region or even smaller localities, for example the embroidery on a woman’s blouse could actually identify the village she lived in! It can also be seen as continuum throughout Europe where historically elements and motifs have been shared and passed on from country to country. I often see it in the same way that folk costumes in Europe can carry distinctive and identifiable links across half a continent.

Much of the design work on furniture would have been linked to status and marriage, and dowry chests for example were an example of a family showing off its pride and wealth in richly decorated trunks that would have held years’ worth of embroidered textiles the new bride took with her to her new family.

The Kalotaszeg region of Transylvania is a great example of how folk art can flow from designing bright and pleasing clothing to pretty much everything inside the house! Houses would have a “tiszta szoba” , their “formal rooms” – where they kept their painted pottery clothing and furniture. Much of this can be seen as having pride in your own culture, and the distinctiveness of the styles within each region are still something that binds cohesion within such a diverse continent. 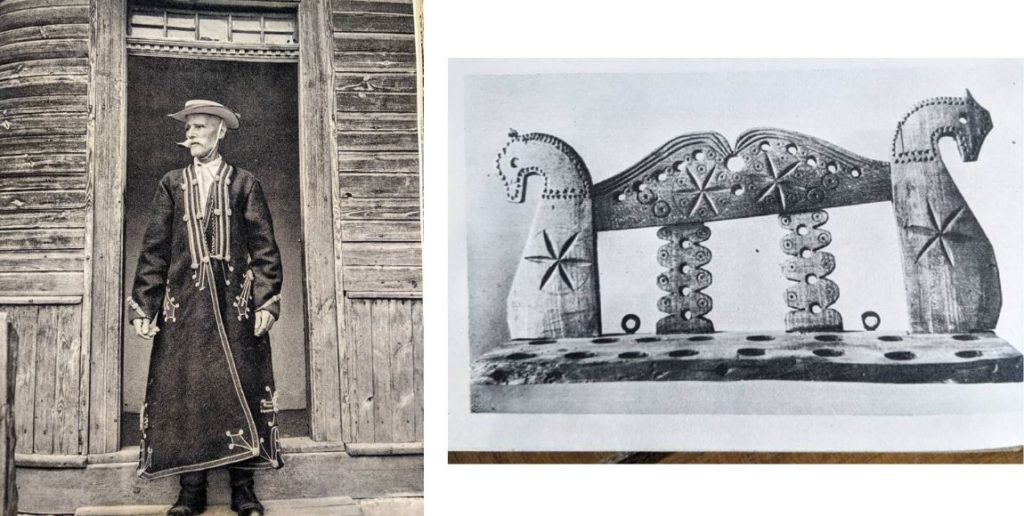 I love how bright and colourful your designs are, what’s the starting point for a new design idea?

The starting point is probably the thing I struggle with the most ! Very occasionally I will carry a design in my head for a long time- and then the right piece of furniture comes along and the job’s done. Most often, though, I have too many ideas, and they all fight each other and I’m stuck in the middle!

So recently I have tried to help myself by painting small boards with particular designs and colours, I can then hold them against the bench or whatever I’m working on and it helps me see it. Another thing I seem to carry in my head is that I see myself as almost dressing these benches back in their traditional ‘clothes’ and I often laugh to myself when I imagine that they seem quite pleased with the result! 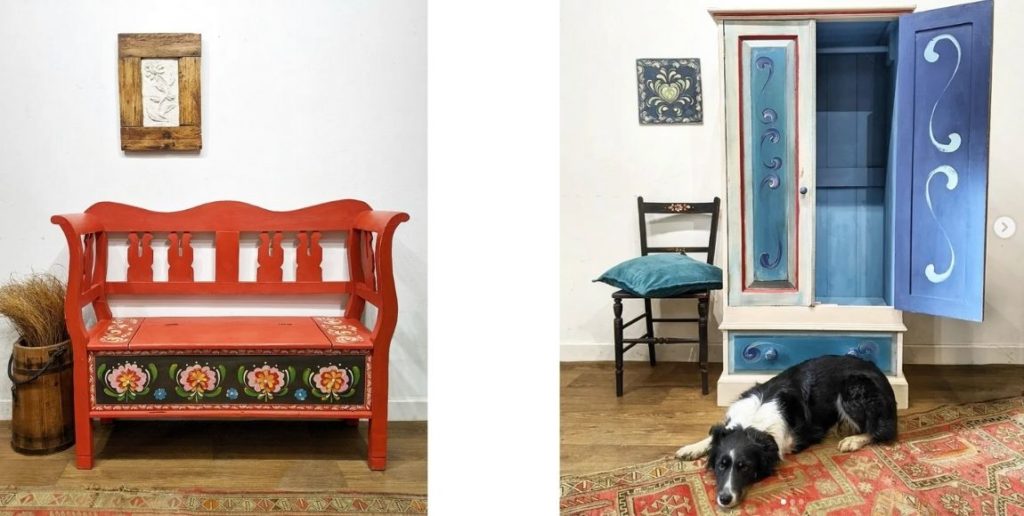 What’s the process like when working on a commission with a customer?

Commissions have actually been great fun for me to do. Generally, what happens is that the enquiry will be about a design that they might have seen on my Instagram or website, and sometimes they reference something from their own backgrounds. They will have either a piece of furniture that they want me to paint or even want me to source something else of a particular size to fit their room. I ask for a small deposit and a run through with the customer on the style and colours they would like, and also if they want it to look a tiny bit “aged” or clean off the shelf. I always try to have several unpainted pieces that can lend themselves to a commission as trying to source benches in particular can be difficult sometimes.

In general the English aesthetic is clearly very different to what I paint. Britain is famous for its cool elegant colours, and unfussy interior design. But there is also a move at the moment towards adding a bit of eclectic style into those homes and perhaps that’s where I fit in?

And finally, what’s your favourite piece you’ve created so far?

The answer to ” which is my favourite piece I’ve created so far? ” – is usually the last one I have painted! Although there is a small black bench with a red heart in the middle that I have kept aside for myself because I don’t think I could bear to part with it. It’s still up on my social media as an example of my work – and funnily enough someone is considering a commission to replicate it – which I would obviously be very happy to do.

Studio Sosenka is open every Thursday for viewing, or contact Gosia for a private viewing or commission. 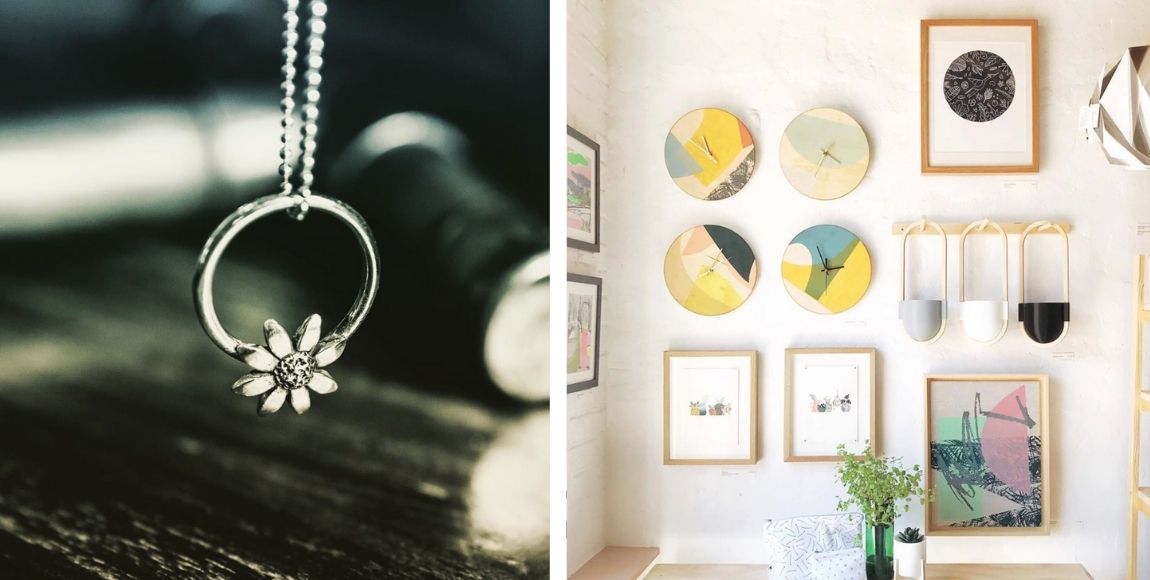 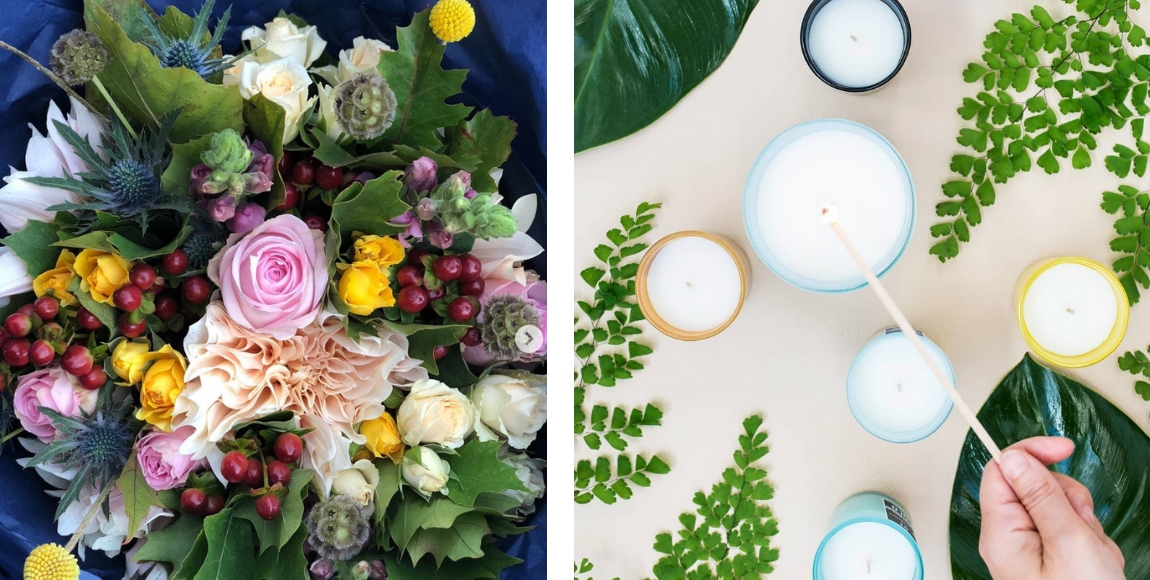 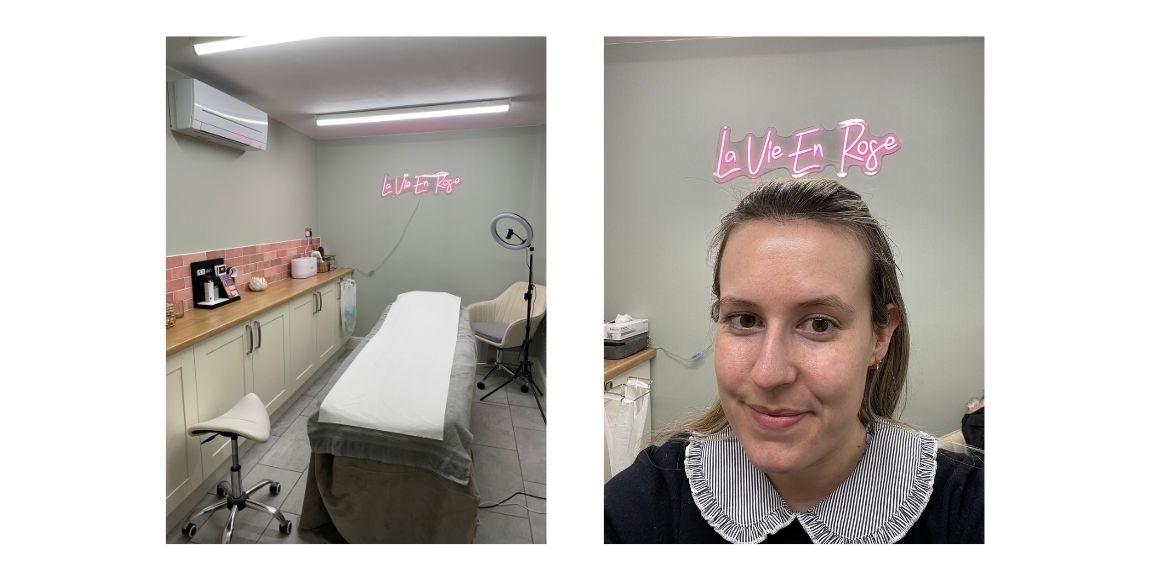